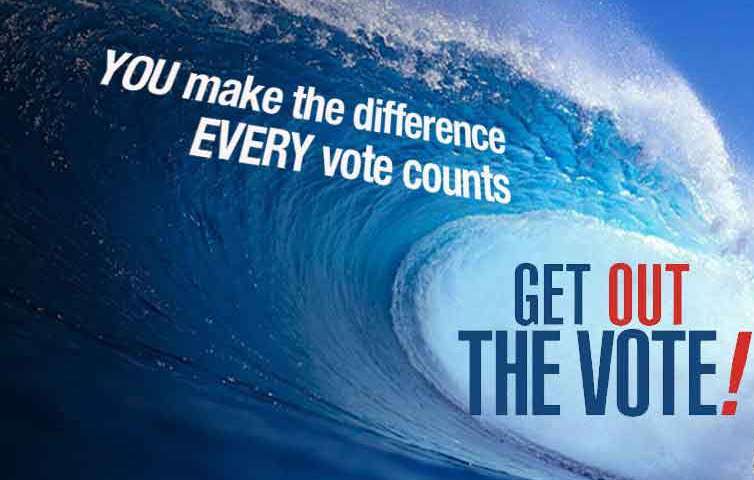 There are 112 Republican-held seats that favor the GOP by 10 points or less. We’ve overcome larger margins already in special elections. Now let’s do it everywhere.
I want 100 seats. After the shitshow we’ve experienced this past week, I want 100 seats to flip from red to blue. Sound crazy? Who cares…let’s all vote and see what happens.

Republicans see a man (and I use that term loosely) demonstrate clear as day for all to see why he’s unfit and unworthy of a spot on our nation’s highest court, and then demand immediate votes to confirm him before all the facts are in…and erupt at Democrats who want to truly advise and consent.

For that fake outrage and callous attitude, let’s take 100 seats.

Republicans know Robert Mueller is an honest-to-God American hero, the type of man Donald Trump will never be. More importantly, they know he’ll search for the truth and can’t be bought along the way. So they launch a smear campaign against him.

For the integrity of Robert Mueller, let’s take 100 seats.

Republicans wrap themselves in the flag and acts of heroism, but attack or ignore any true heroes whose words or actions dare push back against their narrative. They try to cut funding for the medical needs of 9/11 first responders. They vote against bills to pay the military during the shutdown and blame Democrats for the missing paychecks.

For that cynical manipulation and the memories of John McCain, LaDavid Johnson and Humayun Khan, let’s take 100 seats.

For failing to do their duty and act as a check on the executive, let’s take 100 seats.

Republicans don’t lift a finger when children are shot at school every week. They turn the other way when unarmed civilians are abused and gunned down and the injustice is clear on video. But they defend white supremacists when someone dies.

Republicans look backwards on every issue. A woman’s right to choose, same-sex marriage, energy production, net neutrality…on these and so many more, Republicans support and push for policies that go against the majority of Americans’ wishes. They personally have the wealth and influence to not be affected, and that’s all that matters.

For every oil spill and back alley abortion Republicans just brush off, let’s take 100 seats.

Republicans have spent eight years trying to sabotage, discredit and slander a health care bill that’s imperfect but provides much-needed assistance to tens of millions of Americans. They claimed they could replace it with something better, but never bothered to make a plan and now try to chip away at it with the full knowledge people will suffer and die from their actions. And they blame Democrats for the suffering Republicans cause.

For every needless death, and for every citizen who goes bankrupt from Republicans’ hobbling of the ACA, let’s take 100 seats.

Republicans attack the media they can’t control (or maybe aren’t controlled by). Journalists fulfilling an honorable and necessary role in our republic are ridiculed, threatened, attacked, and even killed just for doing their jobs. Reporters, know your work is appreciated and history will smile upon your words.

For the staff of the Capitol Gazette, let’s take 100 seats.

For every survivor of sexual assault, who have been reliving your experiences this week…only to get the cruelest reminder last night why you never reported it. I can’t possibly imagine what it was like to see the President mock a survivor for having the courage and civic duty to tell her story.

For Dr. Christine Blasey Ford and the millions of survivors out there, know you’re respected. Know you’re believed. And know the disgust you feel right now is shared by Americans of good conscience from sea to shining sea. In your honor, let’s take 100 seats.

There are 112 Republican-held seats that favor the GOP by 10 points or less.
It’ll takes 23 seats to win the House. That alone may change the course of history. That alone may be enough to hold this administration accountable and protect the people, environment and institutions that have cultivated American exceptionalism for generations. But in the end, if it’s only 23 seats it’ll be a disappointment.

2016 was a shock to the system, and some people voted specifically for that shock, admittedly unsure what would come of it.

Two years later, we know. Our allies are looking elsewhere and the dictators of the world consider the West Wing an ally. The economy and market have remained strong, but most Americans aren’t sharing in the games. Hate crimes are up, corruption is overlooked, children are ripped from their parents’ arms and cry themselves to sleep in cages, and the leader of the free world sits in bed watching cable TV for policy ideas while insulting American citizens on Twitter.

For most Americans, this isn’t the change you were looking for. This isn’t greatness, and it isn’t acceptable. Simply put, the past two years are beneath us as a nation.

That’s why we want 100 seats to flip. To reestablish belief in the idea of America, and to show the world (and ourselves) we’re still trying for that shining city on a hill we all want the United States to be.

If push comes to shove and Democrats barely take the House, and they mostly win in a couple of blue states and districts…I’ll take it. But I hope for greater. I don’t only want wins outside Los Angeles, Seattle, Minneapolis and New York.

I want wins in Spokane and OKC, in Aspen and Omaha and Lexington and Charlotte and all the wide open spaces in between. I want national park rangers, farmers and small business owners to feel secure knowing you’re represented by a Democratic congressperson who will support the issues your community needs.

And I want it all to happen within absurdly high turnout, to send a message to those who profit in lies and division that we the people see you, and we recognize what you’ve done.

It’s time for the American people to say ‘Enough’. Yesterday, Donald Trump mocked a sexual assault survivor and American citizen on national TV, and it came a few hours after information about his own potential tax evasion came to light. This past week has been the cap on 20 months of lies, controversies, corruption and attempts to exhaust and divide us every step of the way.

It’s time for the American people to make their voices heard. For the ideal of what the United States can and should be, let’s take 100 seats.